This is Billy Momo 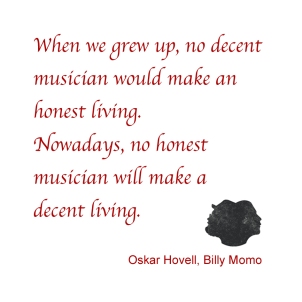 Yes, Billy Momo does write songs on political and social subjects. But it seems to me it’s kind of hard to do it right.

I love it when a song has a deeper meaning and it’s incredibly cool when music can put out a message that changes the world.
It’s just that to me, the subject doesn’t make it a song. It’s still the way you tell it that counts.

When you express an opinion, you have a responsibility. Especially these days, when your opinions are posted on social media and there are many people reading. With the terrible amount of hate and fear we now have floating around, desperately looking for somewhere to point its finger, there are risks involved with claiming the truth. You need to check your facts and also think about what people may read into your statements.
Here’s the difference between that and writing a song.
Music has to be about expressing your emotions. It cannot be about coming across as politically correct, teaching the youth or taking part in a cause. Those things are welcome as a bonus, but if you’re not expressing an honest feeling, without censoring, you’re violating the artform.
I grew up with a political/musical movement not too different from the flower power movement. People believed that an artist is responsible for the messages they put out and how it’s recieved. I believe putting that on an artist is a big mistake.

Think about it. If only music that seemed responsible, music that expresses views we can stand by, only music that parents would be happy to play to their kids, only music that was never banned from radio, was successful, would any of the music you listen to exist?
A lot of my favorite artists were or are assholes. And I don’t care! They sang it and they meant it. They probably meant it in a fairly twisted way, but they were still sharing a piece of their souls with other people. If anything, it’s beautiful that we can share something really deep and profound with someone we could never get along with outside the music. That should contribute to a lot of love and understanding, right? And to me, it’s deep and profound because you mean it, wether it’s about healing the world or making love.
So, what this all comes down to, in my view, is that artists don’t have to be good guys. They only have to be honest.

If our music is to contribute to world peace, it needs to be free of judgement, so that it can touch people emotionally, because that’s what music is good for.

One thought on “Blowing in the wind or just sucking in general?”